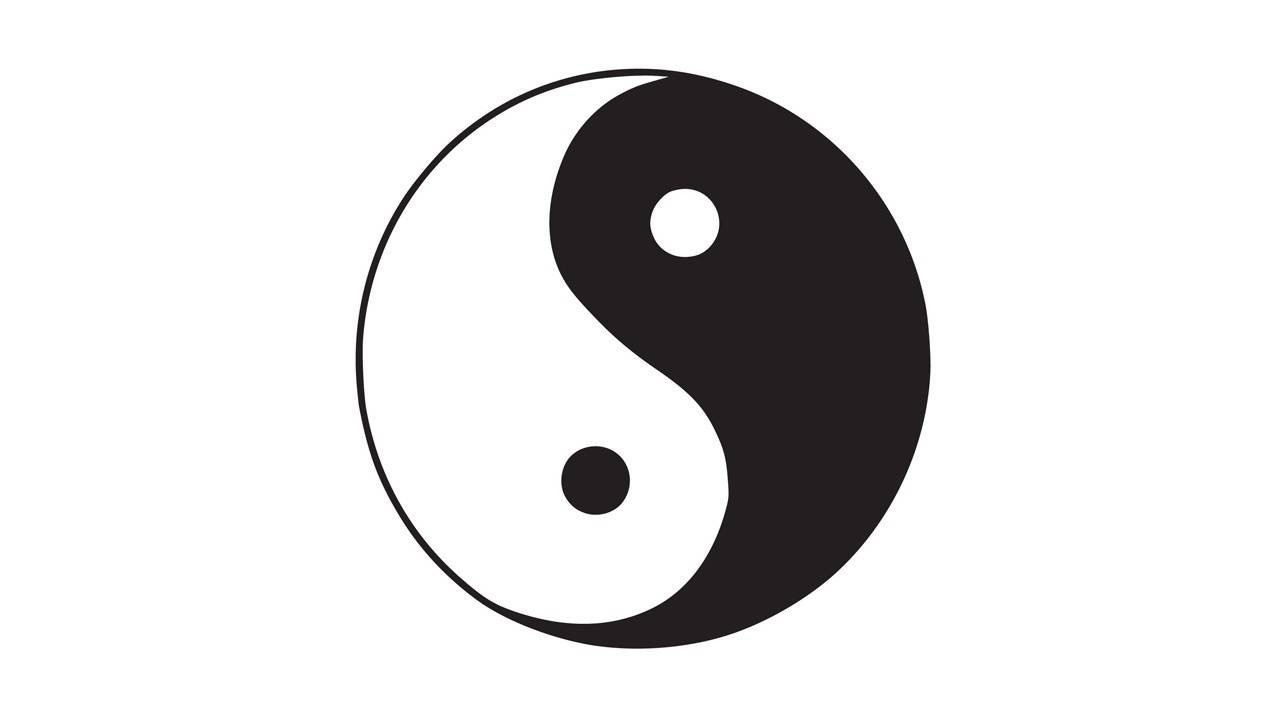 There are two kinds of intelligence: one acquired,

As a child in school memorizes facts and concepts

From books and from what the teacher says,

Collecting information from the traditional sciences

as well as from the new sciences.

With such intelligence, you rise in the world.

You get ranked ahead or behind others

In regard to competence in retaining

Information. You stroll with this intelligence

In and out of fields of knowledge, getting always more

Marks on your preserving tablets.

There is another kind of tablet, one

Already completed and preserved inside you.

A spring overflowing its springbox. A freshness

in the center of the chest. The other intelligence

does not turn yellow or stagnate. It’s fluid,

and it doesn’t move from outside to inside

This second knowing is a fountainhead

From within you, moving out.

This poem by Rumi explains the dynamic dance between Yin and Yang with such inspiring philosophical languages. It is true that great minds think alike, ancient Taoist theory and modern complexity science are in agreement with Rumi.

Complex adaptive systems have the potential for positive sum games. Finding seemingly opposing tendencies that are in complementary relationships is key to unlocking that potential. The dynamic relationship between such pairs is what the Taoist Yin &Yang theory is all about.

This topic is important because it offers a path beyond the zero sum game as epitomized by the pendulum swings analogy. A different future starts with thinking differently.

"You cannot solve a problem with the same mind that created it." — Albert Einstein

In this article, I will share a few dynamic pairs that are central to my daily sense making and problem solving. I top the examples with a Yin &Yang inverse thinking framework to help you fully leverage the power of this way of thinking.

Some of the pairs are more relevant to my professional life, and others are more pertinent to my personal life. Holding the two ends of each pair simultaneously saves me from fragmented thinking, and offers surprising insights.

Here are a few examples to solidify this concept.

For a Chinese person living as an expat in the United States, the “identity” question is a very practical one. Do I feel more Chinese or more American? If I put myself on a scale with Chinese on one end, and Americans on the other, I subject myself to a zero sum game: more Chinese means less American, and vice versa. This scale provokes anxiety and tension with the same mechanism as the swinging pendulum. Yearning to liberate myself from this self-limiting thinking, I work to establish a “dual identity” that co-exists harmoniously. My first identity is the “unity identity”, where I am a member of the human family, and I share the hopes and fears of all my other family members. My second identity is the “diversity identity”, although I am born and grow up Chinese, I am heavily influenced by American culture and open to the influence of other cultures as well . Since I am firmly grounded in the shared needs of all humanity(unity), I can be very adaptive and creative with strategies to meet my personal needs(diversity). I celebrate Chinese holidays, American holidays, and holidays from other cultures, especially if there is food involved! I have an international kitchen with the best ingredients and my favorite recipes from all over the world. Best of all, I have no pressure to conform to anything. I have the freedom to explore, experiment and enjoy. That is how I liberate myself from this zero sum game.

While we are on this topic, let’s take a look at Chinese versus American cultures through the lens of diversity and unity. This contrast is fruitful because these two cultures are inverse of each other in many ways, just as the day and night at these two countries are inverse.

China has the longest uninterrupted written history of more than 5,000 years. Through the long history, the Chinese have developed a strong unified culture, with commonly shared values and beliefs among its people. Modern China is ruled by one party, the CCP. How can one ask for any more unity? Instead of more unity, a message so common in Communist propaganda, China certainly needs more diversity.

On the other hand, the United States is a country that welcomes immigration with people from all over the world. I have often thought the last names in the United States are much more interesting than first names due to the fact that last names carry the cultures and languages from people’s home countries. Diversity is a major inherent strength of this young country. How can one ask for more diversity? Strengthening unity among its diverse people will help to unleash the true power of diversity.

Structure is about stability, while flow is about flexibility. They are both needed for emergence.

Facilitating meetings is a great example of this dynamic pair at play.

Too much structure leads to over control. Some of the typical symptoms include: one person talks through a PowerPoint presentation that takes up 80% of the time; or a small handful of people talk 80% of the time with a distracted and silent majority.

On the other hand, too much flow leads to under control. Some of the typical symptoms are: a brainstorm session where one talks over the other, and participants walk away without learning or finding a resolution, or a group of people convene without an agenda, and one hour passes by with mostly small talk and nervous laughters.

Well designed participatory meetings balance the needs for structure to move towards desired outcomes and flow to capture the creative sparks that emerge from robust interactions. The paradox is: the more preparation the meeting facilitator has placed into the structure, the more effective she will be to the spontaneous needs arising at the moment.

As a meeting facilitator, I always prepare a well thought out meeting structure, and make sure my meeting participants are well prepared and informed of the contents prior to the event. I am also ever ready to walk away from that structure and follow the flow of the group dynamics. Many meetings fail because the leaders are not prepared for either the structure or contents. Unfortunately this often leads to overcompensating for the lack of preparation with over control, thereby stifling the natural flow of the groups.

Daily rituals and routines is another great example for this dynamic balance.

Research shows that adults make 35,000 decisions a day. That is quite voluminous. We need to save energy and focus on big decisions. I advocate utilizing daily rituals and routines to streamline decisions to preserve valuable time. Hopefully the rituals and routines decided on generate more energy and ability to enhance the creative momentum that we are seeking and hope will arise. I have been very successful implementing a morning routine: jogging, meditation, spiritual reading, journaling. They help me to start the day with a well exercised body, a clear mind and an open heart.

FOMO, Fear of Missing Out, seems to plague many people. We are offered too many choices, from commercial products to vacation destinations, from research topics to interest groups.

Whenever I hear people scream from drowning in the ocean of choices, I always wonder about their “golden thread”. What is their point of focus?

I first learned the term “golden thread” from the interview with the former vice president of the World Bank Isabel Guerrero. At the time of the interview, she was in the liminal space of just retiring from her successful career in the financial world. She talked about her “golden thread” as wanting to help the poor and appreciating the beautiful art they create. She felt the first part of her life has been about helping the poor to achieve financial stability, while the next part of her life might be about creating and appreciating beauty. For a person with so many choices, I am amazed at her clarity of focus.

I recommend that individuals confused with too many choices take a pause and revisit their original intention. The same is true for teams.

As a team scientist who works with several large science initiatives, I help teams to gain focus and make choices. I describe my approach as “think nonlinearly, and act linearly”. When thinking nonlinearly, we examine all the choices available; when acting linearly, we settle on a few ground breaking, path finding projects. This LinkedIn post explains more.

Abundance and Scarcity are two opposing tendencies that hold true for all human reality.

The physical body faces constant scarcity. The resources on this earth cannot sustain unlimited growth, nor can the frame of the human body. There is no argument that the final destiny for each human body is death and decay.

Since we all simultaneously live in the world of abundance and scarcity, how do we make sense of this? I believe the key is to have abundance serve as the “master” and scarcity as her “emissary”. Since we are all going to die, why not live with hope, faith and love? Respect for scarcity helps to unleash the power of abundance.

The scarcity/abundance pair also helps to distinguish complicated mechanical systems from complex living systems. Complicated mechanical systems are governed by rules of scarcity. A car or a building cannot regenerate on its own. Complex living systems are governed by rules of abundance. Are you amazed at how nature regenerates every year? The daffodils are always on time, so are the hummingbirds; the summer bug concerts in the evening always start on time, so do the morning concert of birds chirping. Complex living systems have the potential to continue on the s-curve through the regenerative cycles, and in that process offers unbounded possibilities.

I am not arguing to remove compliance. The whole point about the Yin & Yang framework is that both are important, because humans are far from perfect. The base of the argument is, if organizations value abundance over scarcity, they may be better able to leverage the creative potential of their people and the intricate relationships among them.

I hope the examples above have demonstrated the power of holding both ends in each dynamic pair.

Below I have outlined this framework in a few easy-to-follow steps.

Step1. Recognize that everything in creation comes in pairs.

Step 2. Find the pairs with seemingly opposing yet complementary relationships.

Step 3. Let the pairs dance with each other towards a dynamic state of balance.

Step 4. Inverse thinking: if you feel challenged with one element, more often than not, the answer may be in the other. Let’s take A and B as one of such dynamic pairs. If you want to increase A, and have poured in much effort with little results, see if increasing B helps. Similarly, if you want to decrease A, and interventions directly targeted at A have yielded poor outcomes, see if decreasing B helps.

I found this quote from the meditation teacher Sharon Salzberg in her recent podcast Giving Your Heart Over to Real Change: “When you know better, you do better.”

"When you know better, you do better." — Sharon Salzberg

The world is going through many complex challenges right now. At the root of all the challenges are faulty ways of thinking that pit one party against the other.

My hope is that when we know better, we can do better!

This is a repost. Original article on Medium