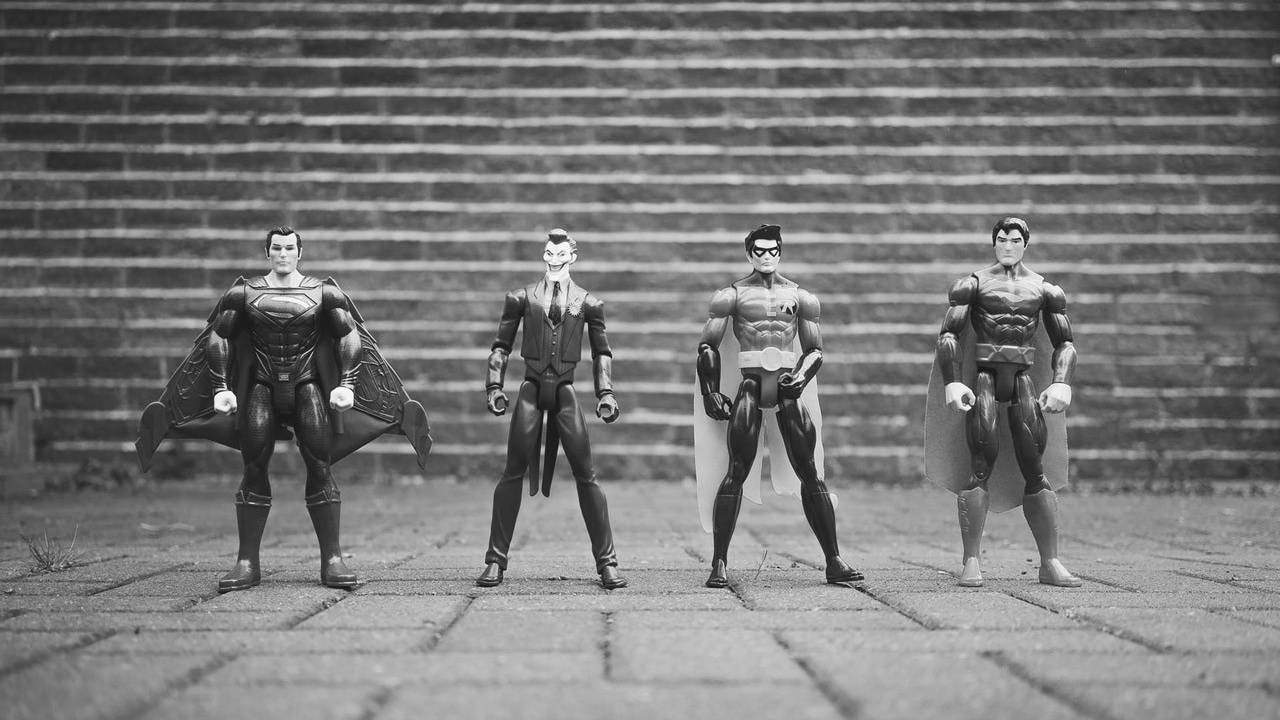 Avengers: Endgame made $2.8 billion at the box office. Another superhero film smashing box office records. Is this evidence of the infantilization and dumbing down of the West? Or do superhero films artfully reflect contemporary themes and worries at us?

I think it is the latter. The best of these films reflect on issues of leadership in complex environments. Where events are unpredictable. And knowing who to trust impossible.

Furthermore, the Marvel universe is the most sophisticated, complex attempt at story-telling in cinematic history. While DC has failed to match this vision, it has provided us with one of the great modern morality tales in The Dark Knight.

So, what can we learn about leadership from superhero films?

Captain America v Iron Man! The clever cynic v the naive patriot. And a wonderful examination of the complexity of evolving identity. Plus whether leadership is about security, protection and regulation. Or freedom, risk-taking and intuition.

The two characters' journeys occur in oppositional parallel. Tony Stark is an egomaniacal genius, billionaire, playboy and philanthropist. He distrusts all forms of officialdom and regulation. Does things his way. Lives his life according to his rules. Has unfettered passion for his projects. And equally unfettered cynicism for the government.

However, his technology brings about as much misery as it does success. Trying to deal with this realisation, he struggles with alcoholism. Paranoia. And, as the unintended consequences grow, a severe guilt complex. No longer trusting he can make authentic decisions, he turns to the government. Believes they should provide oversight on his innovations and actions. And regulate those like him.

Steve Rogers journey starts in an uncomplex time. When good v evil was clear-cut. The Allies v the Nazis. For him, America is the exemplary good guy. Democratic, protector of freedoms, moral and true. He is the "ra-ra company man" of corporate and military America. This informs his highly moralistic stance, which in turn informs his leadership.

As he comes to terms with contemporary life, this mindset fades. And changes into something else entirely. Chris Evans, the actor who plays him, describes Captain America's journey like this:

"It's exciting to see a guy who's as optimistic and as selfless as Steve be met with letdown, betrayal, frustration, and selfishness. There are events and people in his life that test him — that challenge him and force him to reevaluate who he is and what he wants out of life."

Captain America, the heroic, moralistic figurehead of U.S. power ends up a rebel. An insurgent. Convinced that there is no morality in the government. No authentic leadership. And that the only hands he can trust are his own. So he rejects any attempts at oversight and regulation. And strikes out on his own.

The tension between private and public power dominates the Iron Man & Captain America stories. It places the morality of leadership under the spotlight. Illustrates how emotionality and cognitive maturity shifts perspectives and decisions. That seemingly hard and fast opinions are fluid and changeable when confronted by unexpected and challenging circumstances.

It also highlights the tension in moral decision making in powerful positions. While making a decision driven by guilt and authentic feeling, Iron Man risks his well-financed corporatism aligning with the political system in a proto-fascist union. Likewise, Captain America loses trust in the system. And gives up any possibility of influencing the system internally. He becomes a disruptive player. Believing in a new morality of leadership, but without the resources to make it happen. At least at first.

Eventually, they switch characters absolutely. Stark, the egocentric, playboy cynic, sacrifices himself for the good of others. Rogers, once he finishes his final task, gives up his life of moral duty for one of personal happiness.

The Dark Knight is one of the most magnificently realised modernist fables ever. At its heart a multi-billionaire who doesn't invest in socially entrepreneurial projects. But publically lives a playboy lifestyle to deflect attention from his project. Which is dressing up as a bat. Designing innovative ways of mutilating and killing people. And beating up the underclass.

Sounds insane? Not necessarily. It perfectly captures the moral tension of modern civilization. The basic premise? That the barbarians are always at the gates. And that to maintain civilization we must be better than them at barbarous things. More brutal. More violent. This defines the Batman.

The brilliance of The Dark Knight occurs when Batman finally understands this tension. He gets placed against the barbarous Joker via Alfred's comment,“...some men aren't looking for anything logical, like money. They can't be bought, bullied, reasoned, or negotiated with. Some men just want to watch the world burn.”

The Joker reduces the tenets of modernity to rubble. How can you deal with somebody who rejects the very core of modernity? By becoming worse than them. Using modernity's terrible weapons to destroy them.

That's what the Joker continually taunts Batman about. Batman needs the Joker. No brutal barbarism then no brutal defence of civilization. Without the disease, the cure makes no sense.

Refusing to become the cure worse than the disease, Batman chooses to become Gotham's scapegoat. He decides to take responsibility for the death of Harvey Dent. It is the worst thing he could be. The man who killed the city's last remaining hope. By exiling himself, he becomes the pharmakos. The executed or exiled scapegoat. Whose destruction cleanses the city of all evil.

This type of tension informs the practice of modern leadership. To be a leader, you must slay organisational monsters. Those who would defy or resist you. Or disrupt your goal. The barbarians at your gates. In doing so, you get forced down a "one best way" route. Every other way of doing things gets rejected as blasphemous. Your way is the only way.

Eventually, you sacrifice yourself. Because there is nobody left to blame organisational woes on but you. Your cure has become worse than the disease. It is a tragic irony that so few leaders fail to appreciate.

Peter Parker is an emergent leader. There is nothing in his background that suggests he has leadership potential. He's an uber-nerd. Bullied at school. Can't get a girlfriend. Clumsy. Always late. But via an accident and a guilt complex, he assumes the leadership mantle.

Spider-Man is motivated by guilt. He is taught by his uncle that, "with great power comes great responsibility."

Then abdicates that responsibility because of materialistic and lustful urges. And a revenge-driven morality. Which results in his uncle's death.

As a consequence, Spider-Man assumes the mantle of leadership and responsibility. And spends his life struggling to cope with it.

Spider-Man 2 is perhaps the best exploration of this struggle. Parker's life is an astonishing mix of competing responsibilities. He must earn money. Hold down two jobs. Try to get an internship. Look after his aunt. Develop his relationship. Study. And protect the city from existential threats.

All while wearing a mask that prevents those he cares about from knowing about his struggles. It's not just the Spidey mask. If anything, wearing that is freeing for him. It's maintaining a mask of normalcy in an abnormal, highly stressful situation. He is more masked without the mask than with it.

Wanting a normal life, Parker considers abdicating his responsibility. Letting his followers and fans down by giving it all up. Because it is almost impossible to cope with the pressure. The constant juggling of contradictory imperatives. Never being able to relax as it means you'll drop a ball.

The relationship between power and responsibility defines much of the morality of leadership. Once you are on the rollercoaster there's no getting off without abdicating your responsibility to others. And, historically, very little help in dealing with the pressures of power. While the rise of coaching helps leaders deal with the contradictory responsibilities, they are still often overwhelming.

Nobody can be that powerful or perfect. His struggles seem forced. His enemies unrealistic. We cannot identify with him. He is an unreal, hypothetical leader that puts unbearable pressure on those that would try to emulate him. The personification of the leader that the business press sells to us. But doesn't and can't exist.

Thor films also struggle to convince because of his godlike qualities. And that Loki is obviously better suited to leadership. Loki is smarter. Resilient. Adaptable. Thor is just big, blond and pretty.

But he's the eldest son. So he inherits everything. Nepotism rather than meritocracy. Talent doesn't matter a jot. Just an accident of birth. Yet we are supposed to blame Loki for being bitter and resisting the status quo!

After two poe-faced films, Thor does become more interesting when he starts questioning his birthright. Should he follow his father’s footsteps and inherit the kingdom? Or should he give it up and offer it to somebody more suited to the task? Thor’s struggles to cope with the mantle of expectation, and a number of high-profile failures, leave him a shadow of his former self. His eventual redemption gives him the courage to pursue a new path. To discover the leader he might be rather than the leader he was expected to become.

The Hulk is interesting because of the trendiness of strength-based thinking. Bruce Banner is undoubtedly the superhero that you would most want to follow. Super-intelligent, charming and humble. Innovative, creative, enthusiastic and energetic. A range of wonderful strengths.

But one weakness that makes him impossible to work with. Anxiety driven anger. Put him in situations he can't control and he becomes a green-skinned anger monster. Who destroys friend and foe alike. Plus everything his genius has built.

Strengths-based coaching suggests we should ignore this weakness. Just look at the good stuff. But who would want to work with the Hulk?

Eventually, he reconciles the two sides of his character and gains control over the shadow side. Doing so helps him push himself beyond his limits. But only after years of struggle, hardship, extreme emotional pain, and deep reflection.

The Black Widow and Hawkeye

Two characters that lack the obvious skills of others assuming leadership roles. The don't quite know how or why they got involved. Or what's going on. As Hawkeye says, "The city is flying, we’re fighting an army of robots and I have a bow and arrow. None of this makes sense."

But they work hard to overcome their shortcomings. Fully contribute. And, by taking risks that the others don't have to, at the cost of one’s life, are perhaps the most leaderly leaders of all.

Ultimately, I think the rise in superhero films reflects a powerful cultural trend. As I wrote in my post on TV series and organisations, dystopian themes are everywhere. We are subconsciously aware that we are at a tipping-point in the post-industrial working environment. That the old ways of leading, managing, organising and working aren't effective anymore. Which scares us. And attracts us to dystopian art.

Superhero films are the antidote to this dystopian obsession. Superheroes aren't the old, white males that sit on the cover of business magazines. Telling stories of their wealth and success. Held up as exemplars for us all. Perfect leaders running perfect organisations. That we should all learn from.

No, superheroes are flawed. They have to come to terms with a leadership role thrust upon them. Struggle with its responsibilities. In the process, they exhibit character flaws. Personal weaknesses. Poor decision making. Emotionality. And in doing so, become more real than the leaders sold to us by the business press.

Subconsciously, we know this. We know that there can be no superhero coming to save us. That it's up to us. Which is why we are attracted to superhero films. For they show us how to be heroic in a shitstorm of volatility, uncertainty, complexity and ambiguity. Which is just what we need to see.